Gear Up, Jagame Thandhiram is here to take you by storm! 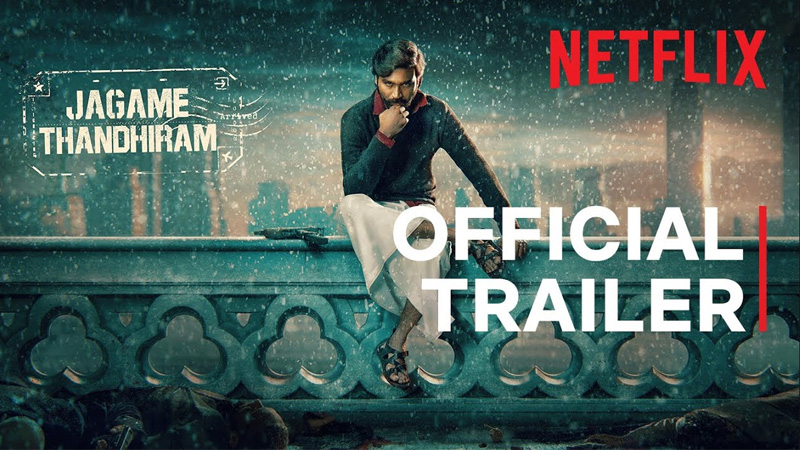 Netflix today launched the trailer of its upcoming Tamil blockbuster, Jagame Thandhiram, and we cannot help but go Rakita Rakita Rakita. In a war for what one can truly call home, director Karthik Subbaraj brings to screen the story of a Tamil gangster played by none other than Dhanush! Produced by YNOT studios and Reliance Entertainment, Jagame Thandhiram will make its worldwide debut on June 18, 2021 – exclusively on Netflix!

The entertainer will serve as the perfect summer blockbuster with its stellar cast including Dhanush, Aishwarya Lekshmi, Joju George, Kalaiyarasan, Sharath Ravi and James Cosmo. This, combined with Santhosh Narayanan’s toe-tapping music, is bound to keep audiences at the edge of their seats throughout.

The much anticipated Jagame Thandhiram will be available to 208 million Netflix users around the world. The film is also dubbed in Telugu, Kannada, Hindi and Malayalam.

Speaking about his film, director Karthik Subbaraj said, “Jagame Thandhiram is my dream film that was made with the ambition of telling a gripping story, about a globally prevalent issue ,through a locally rooted character – in the most interesting and entertaining way. Audiences will yet again see Dhanush bring his immense talent and entertainment to the table across 190 countries on Netflix. Produced by YNOT Studios and Reliance entertainment, Jagame Thandhiram will be available worldwide on Netflix on June 18th!” It hurts when it gets personal!

About Netflix:
Netflix is the world’s leading streaming entertainment service with over 208 million paid memberships in over 190 countries enjoying TV series, documentaries and feature films across a wide variety of genres and languages. Members can watch as much as they want, anytime, anywhere, on any internet-connected screen. Members can play, pause and resume watching, all without commercials or commitments.

For the latest news, updates and entertainment from Netflix India, follow us on IG @Netflix_IN, TW @NetflixIndia and FB @NetflixIndia

About YNOT Studios:
YNOT Studios is a film production company in Chennai, India, established by producer S. Sashikanth in 2009 and has produced 18 feature films as of 2021, which includes productions made in the Tamil, Telugu, Malayalam and Hindi film industries of India and of which ‘Vikram Vedha’ (2017) directed by Pushkar & Gayatri – their biggest hit, is being made in three different languages. Their latest release ‘Mandela’ became extremely popular worldwide and is a critically acclaimed political satire in Tamil language. Their upcoming release is Jagame Thandhiram, which premieres on Netflix on June 18,2021.
Key People : S Sashikanth @sash041075
YNotStudios Twitter & Instagram – @studiosynot

About Reliance Entertainment:
www.relianceentertainment.net
Reliance Entertainment is the media and entertainment arm of Reliance Group and is engaged in the creation and distribution of content across film, television, digital and gaming platforms. Internationally, Reliance Entertainment has partnered since 2009 with iconic film producer and director, Steven Spielberg, in the formation of DreamWorks Studios, and thereafter, Amblin Partners. This relationship has produced several successful films such as The Help, War Horse, Lincoln, The Hundred Foot Journey, The Girl on the Train, A Dog’s Purpose, Bridge of Spies, The Post, 2019 Golden Globes and Oscar winning film, Green Book & 2020 Academy Award nominee and Golden Globes winner 1917.