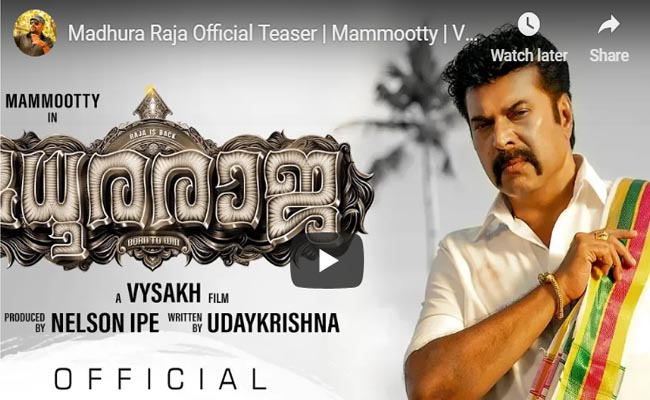 The day has finally come for the fans of Megastar Mammootty to cheer, as the teaser of Madura Raja got released. As was promised by the makers, the teaser of this Vysakh directorial hit social media spaces at 6 PM. The teaser featured Mammootty afresh, as he was during the time of Pokkiri Raja. Ensuring a mass masala entertainer, the teaser runs into 42 seconds and is filled with Megastar rampaging through his opponents.

The project has been produced by Nelson Ipe under the banner of ‘Nelson Ipe Cinemas’. While the script has been penned by Uday Krishna, makers have roped in Peter Hein for handling the action choreography. Earlier, makers have released the character posters of Madura Raja, which ensured that most of the characters, who were featured in Pokkiri Raja, would reprise their roles in this project as well.