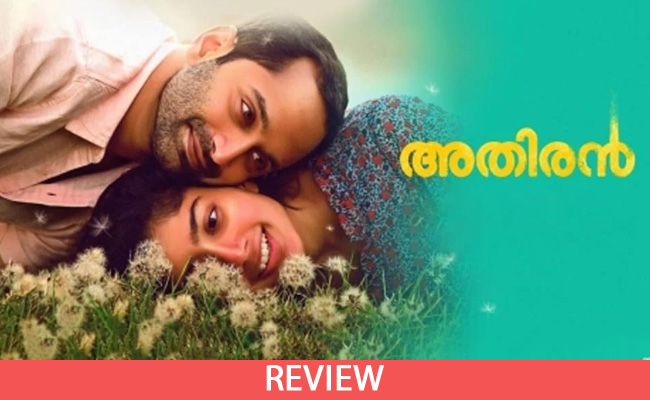 Athiran had managed to create a buzz in the town, since the release of the trailer. The trailer did introduce all the major characters of the movie. In fact, the movie is an enlarged version of the trailer. Set in the 1970s, Athiran is a psychological thriller that is not without any flaws, but does offer an engaging experience. Debutant director Vivek has proven his mettle, and is a promising figure in the genre of psychological thrillers.

Movie starts off by showcasing a series of murders, which take place in 1967 and some five years down the lane, we have Dr. Kannan Nair entering a mysterious mental asylum and accosted with the cranky behaviours of Dr. Benjamin (Atul Kulkarni) and Renuka (Lena). There are some serious dissidences between Kannan Nair and Dr. Benjamin in terms of their conflicting methods of healing the inmates of the mental asylum. Viewers are also introduced to the inmates, having peculiar behavior patterns, out of which Nithya Lakshmi (Sai Pallavi) is an autistic patient. Athiran subsequently goes through the traumatic past of Nithya Lakshmi and how Kannan Nair involves with her life is what the movie presents before you.

Athiran is quite enjoyable that it has managed to create an atmosphere of mystery and a gripping tale. As far as the genre of the movie is concerned with, it is amply supported with the visuals and the BGM, which placed the mood of the movie on a superior note. Anu Moothedath and Ghibran have thus elevated the whole mood of the movie. However, the movie could have been a bit racier, and some final touches from the editing department might have produced a better output. Albeit being engaging for most part, the script of PF Mathews gets predictable after a point of time. Songs were decent, but slowed down the movie a bit. Anyhow, Vivek deserves applauses, as he has managed wielding the entire units under one single umbrella. Though predictable, he kept viewers engaging and there were some fine and beguiling moments.

The performance of the lead cast, was one of the most highlighting parts of Athiran. There were some fantastic performances from the unit, led by Sai Pallavi. We all know the kind of talent that she is. And, Athiran underlined her potentials once again. Her looks and some mere movement of eyes were capable of spooking viewers. Fahadh Faasil too exuberate energy and did well in enacting the role of Dr. Kannan Nair with perfection. The rest of the cast members too made their presence felt, be it Atul Kulkarni, Lena, Renji Panicker and to name the rest. However, for a talent like Prakash Raj, one would have wished, had he been allotted more screen space.