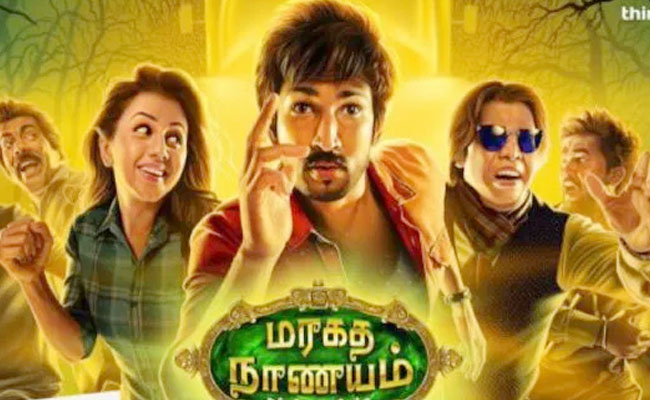 “Maragatha Naanayam”, a whacked-out horror-comedy, entertains more than expected and that, believe it or not, is its biggest strength. As audience, when we walk in with such high expectations for certain films and walk out disappointed, we easily form a perception and that affects the way we judge some films.

This is the kind of film that proves every horror cliché wrong, and in doing so, it succeeds in assuring that there is still scope to innovate with the genre.

Saravanan’s “Maragatha Naanayam”, a multi-genre film, though a heist-thriller, works beautifully as a horror-comedy with a fantasy twist. The film’s story revolves around Aadhi and Daniel who are after a rare, historic artifact whose possession will make its owner invincible and earn them Rs. 10 crore. When they learn that the artifact – Maragatha Naanayam – is guarded by the ghost of its first owner, King Irumporai, they seek the help of three ghosts to help them in their mission.

As silly as the plot sounds, it works wonders when aided by comedy and that’s what makes this film a winner. In a comedy, it’s not so much about the story, as much as viewers expect the jokes to work. In Maragatha Naanayam, you would be surprised how unimaginably funny the film is and the humour is never in bad taste.

The romance angle, for instance, is treated in the most unexpected manner and it leaves you in splits for the most part. Aadhi and Nikki are in love and are together throughout the film but there is no scope for romance, yet you feel it between them. Nikki’s role comes as a big surprise and it’s a relief to see, for once, a heroine not just being used to titillate the audience. This performance will easily go down as Nikki’s best work yet.

Ramadass, best known for his work in Mundasupatti and Maanagaram, steals the limelight on many occasions. He is well complemented by Anandraj, who plays a gangster called Twinkle Ramanathan, and if his name alone doesn’t bring a chuckle or two, you need to see him in the scene with Aadhi and his gang, especially in the climax where he is so tired of arguing, he gives up and sits down.

While some gags are unnecessarily stretched even after making their comic points, it doesn’t rob the film of its overall amusement. Most comic stretches work and while this may definitely not be the best horror film, it’s easily the best comedy of the year.