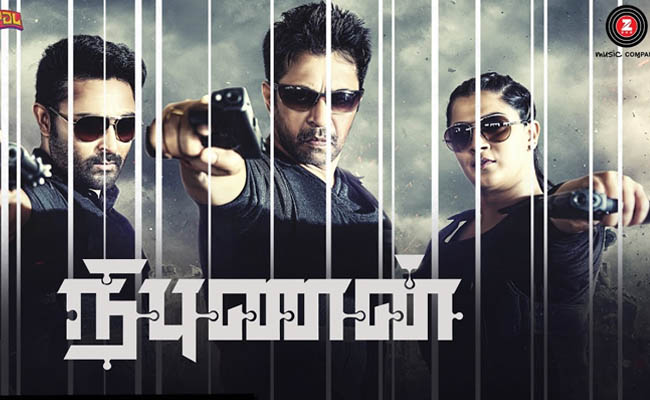 Making a gripping investigation thriller is definitely a tough job, especially since you have access to a wide array of films dealing with some unimaginable plots. Well, ‘Nibunan’ is a decent attempt by director Arun Vaidyanathan, who has tried to incorporate many seemingly different aspects to weave out a thriller.

Movie starts off with a strange case, coming across Ranjith Kalidoss (Arjun) and his team. However, into the case, it soon has become a matter of survival for Ranjith. His team, mainly consisting of Joseph (Prasanna) and Vandana (Varalaxmi), assists Ranjith and uncoils the murder mystery. See, the case is that for a movie that belongs to a particular genre – which has a dedicated library available for conducting case studies – what you could do as a filmmaker is to provide some refreshing elements to choke the audience. Director Arun, for instance has tried to characterize Ranjith as a guy having a particular physical attribute, which indeed has helped to maintain the momentum for some time.

What is even refreshing is the way in which the star in Arjun shared the space with the actor in him. Suiting to his swashbuckling off screen persona, ‘Nibunan’ provides ample space for Arjun to give some memorable moments to the viewers. He also never goes to the level of kicking out all the badass single handedly. But, director Arun hasn’t paid equal attention towards the rest of the characters, who at times loses their sheen and simply placed themselves, as was instructed by the man behind the camera. Even the comic relief provided by the role of Prasanna grappled with inefficient armours.

From the perspective of the filmmaker, we can’t find much of a flaw that derails the plot. The script appears crisp and acts smart according to the needs initially. Soon as we head towards a more detailed elaboration of the happenings, it has to be agreed that, many would have suddenly cracked the case, even before Ranjith did. Now, that is where a crime thriller of sort fails to exceed the expectations of movie goers. The segment of a psychopath killer coupled with a protagonist, who never can boast a pitch perfect state of health, could have given a better output, had if Arun Vaidyanathan paid a bit more attention towards developing a strong sub unit assisting the hero.

Well, visually ‘Nibunan’ did meet the temper of a crime thriller and cinematographer Aravind Krishna has done a great role in making ‘Nibunan’ a watchable flick. On the other hand, Navin’s music should have been a tad scary, rather than being too loud to meet its purpose.