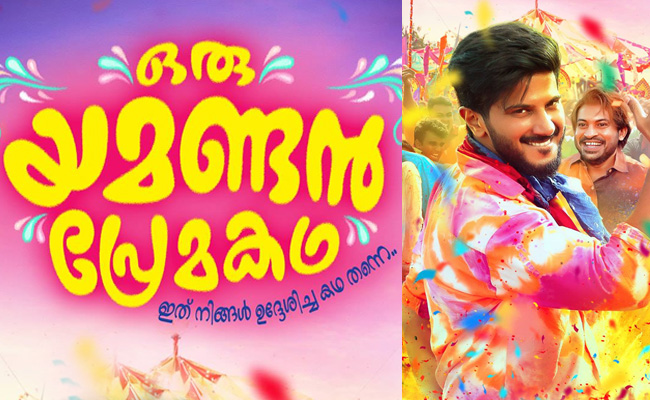 Apart from being a potboiler, what made this debut directorial venture of BC Noufal to generate such a significant interest amongst the masses is because of the presence of Dulquer Salmaan, who has been absent from the industry for more than one and half years. However, for a neutral movie goer, there is one more aspect that generates interest in the project – the script writing duo Vishnu Unnikrishnan and Bibin George. Having churned out two highly successful projects out from their scripts, these youngsters have managed to carve out a niche audience for themselves.

Oru Yamandan Premakadha too begins in line with Amar Akbar Anthony and Kattappanayile Hrithik Roshan. The movie starts off after drawing out the character of Lallu (Dulquer Salmaan) from his birth onwards; the movie progresses further by showcasing the surroundings and companions of the central character. Lallu is a typical loveable boy next door, who is a painter and his parents are in search for a suitable partner for him. However, Lallu fails to embark a journey with any of the girls that come across him. The movie is all about the quest of Lallu to meet someone, who could sweep off his feat.

Like we mentioned before, the movie falls all the similar patterns that we have seen in AAA and KHR. It is filled with numerous light hearted moments, with the uber cool fun loving hero positioned right at the center. However, once into the theatres, audience would find something missing from the action. It is a highly predictable story, but that is not the spoiler here. Something else was missing from it, which made its presence in both AAA and KHR. While debutant director BC Noufal has tried to capitalize maximum from the charisma of Dulquer, the director forgot to carry the ‘x’ factor with him. Having said that the script written by the hit duo of Vishnu Unnikrishnan and Bibin George, hasn’t set the stage to fire for the rest.

The comic moments, despite being delivered by some of the best in the business, haven’t had an impact. The running time of 2 hour 45 minutes, really made the movie to narrate the events on a slower note. It has evidently marred the watching experience, considering the fact there was nothing much to mention on the ‘freshness’ aspect. Into the technical department, again the movie lacked any extraordinary unit to elevate the whole mood of the project. While the length was an issue that derailed the project, neither did the songs nor the cinematographic departments ooze an impressive show. Well, this clearly doesn’t mean that the production quality was mediocre. It is just that there wasn’t any visibly monumental effort from the entire team.

Anyhow, marking the return to Malayalam film industry after a long gap, Dulquer Salmaan seems to have enjoyed the movie thoroughly. Despite not the kind of movie for a star like him to perform, he did reasonably well to enter the mass masala entertainer genre. The movie boasts a number of stars like Salim Kumar Suraj Venjarammood, Soubin Shahir and to name the rest to uplift the mood. They have all carried their parts with much ease, while the heroines had nothing much to do. The surprise element (?) was that of the grey shaded character of Bibin George. He has exhibited some quality acting moments and did look convincing for most part. All in all, Oru Yamandan Premakadha surely is a movie for the vacation, but not ‘THE’ movie that everyone should pay a visit to.