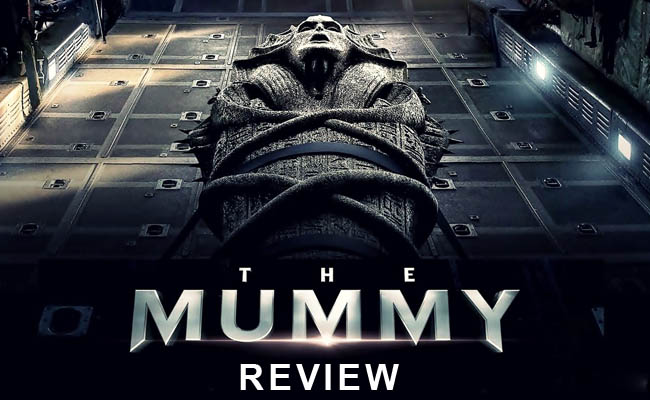 ‘The Mummy’ Review : With this film, Universal Pictures, introduces us to its new franchise — the Dark Universe. The franchise explores the realms of the netherworld, making “The Mummy” an action packed, horror film.

While this film is astutely mounted with all the finesse of a star-studded, studio-production, the end product lacks lustre in terms of its narrative.

Zooming through time-zones, the premise is a bit flimsy and the one-dimensional plot is equally weak with a reincarnation track, ghosts, zombies et al. Nevertheless, the film is engaging for an awe-struck viewer.

The history in the back-story with the weird time zones, though narrated in a simplistic manner, only makes the plot seem convoluted.

The first half of the film shows tremendous promise with a kind of rollicking and goofy action sequence for a perfect summer bonanza. But gradually, by the second half the effort seems extremely conjured. However, in the larger frame it is a sound and visual extravaganza.

Nearly 5,000 years ago, Egyptian Princess Ahmanet (Sofia Boutella) is mummified and entombed in Mesopotamia, which is currently Iraq, because in her bid to take power of her kingdom, she killed her family and was about to stab her lover with a jewel studded dagger.

Circa 1127 AD, the jewel from the dagger is stolen by a crusading English Knight and buried along with him in a tomb in London.

Then, we are transported to current day Iraq, where ambitious soldier Nick Morton (Tom Cruise) steals a map of a hidden treasure from an acquaintance, Jenny Halsey (Annabelle Wallis) and lands up in the tomb of Princess Ahmanet along with his colleague Sergeant Chris Vail (Jake Johnson).

They inevitably liberate her soul and along with her the malevolence grown over the years. The repercussions are deadly as she tries to repossess the sacred dagger and turn her “chosen” one to immortality.

Tom Cruise’s character is ambiguously and feebly fitted into an action-hero mould, where he instead of being the hunter is the hunted and his overcoming of the obstacles is, therefore, a predictable conclusion.

His saying that “we are not looters, we are liberators” insinuates that instead of being a soldier fighting insurgents, he is more interested in antiquity hunting. As a performer, he still has the chutzpah but he does comes off as a lame jaded super-star.

He is effortlessly supported by Jake Johnson as his buddy, who gives ample scope for comic relief. Russell Crowe as Dr. Henry Jekyll with his troublesome alter-ego is simply campy, yet charming.

Annabelle Wallis is perfunctory as the intelligent and saucy archaeologist and Nick’s love interest.

Sofia Boutella with all the lovelorn and vengeful “Mummy” avatar is the scene-stealer. Her persona is what makes her come alive on screen.

Overall, “The Mummy” is a fun film that sets the Dark Universe’s ball rolling as viewers look forward to the next edition.