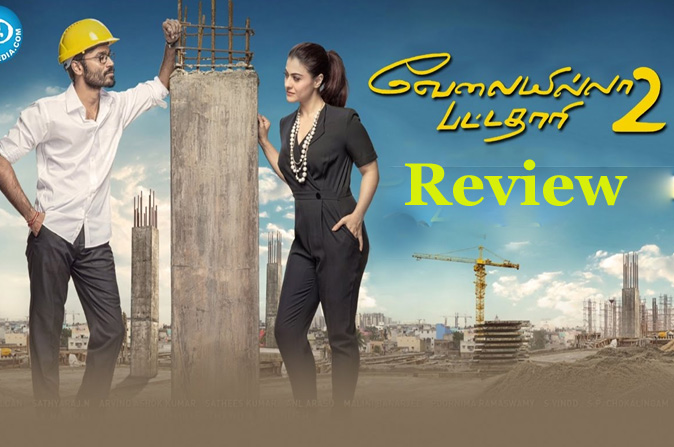 One is not supposed to go for a classic narration of an unheard story in ‘Velai Illa Pattadhari’. The mass entertainer, indeed being sequel to the highly successful ‘VIP’, surely has a point to say – which might not be liked by hardcore fans of Dhanush.

Well, we see Raghuvaran once again going through yet another phase of jobless life. Well, he not just has to take care of the matters of his house, but also that of his wife’s house. However, reminiscent of his past, he joins the action and combats Vasundhara constructions. Up next, how he tackles the corporate biggie, is what ‘VIP 2’ has in its kitty. Surely, the story is meant to provide Goosebumps for mass masala lovers, and Soundarya Rajinikanth was successful to an extent in bringing the heroic figure of Raghuvaran.

However, during the course of events that showcases how Raghuvaran saves the world from Vasundhara, one thing which Soundarya forgot was to bring out an engaging story. For those, who were eagerly awaiting to see the sparkling moments between Dhanush and Kajol, ‘VIP 2’ presented before us yet another sobbing Goliath in front of David. Albeit the story being a highly predictable one, what Soundarya could have done was drawing some interesting characters. Sans Dhanush’s character, no one else in this movie looked fit enough to give a power packed performance. Be it Kajol, Samuthirakani or the too annoying Amala Paul, made no lasting impacts.

Well, you don’t expect me to give only the flip sides, but these loop holes just can’t escape from the lens. Loaded with predictable situations, ‘VIP 2’ also has forgotten to pack an emotional attachment with the audiences – something where the prequel proved to be highly successful. Albeit all these faults, ‘VIP 2’ could still be an engaging ride, as far as the firebrand dialogues are concerned with. Though the music of Sean Roldan lacked the charm, the Iraivanai Thandha Iraiviye track looked good. Sameer Tahir’s visuals were another good part of this biggie.